In poultry, digestible energy is not used to characterise the fraction of ingested gross energy available to the animal since the faeces and urine are excreted together through the cloaca. Conversely, metabolisable energy (ME) is relatively easy to measure and is thus the most used energy system.

It is calculated as:

where GEi and GEe are respectively the ingested and excreted gross energy and Qi is the quantity of feed ingested. In birds, losses by gases are negligible. The in vivo measurement of ME requires a digestive balance experiment in which the quantities ingested and excreted and the gross energy content of the diet and dehydrated excreta are precisely determined. This "total collection" technique is preferred to methods involving a marker introduced in the feed.

ME can be described as apparent or true and as corrected or uncorrected for nitrogen balance. Apparent or classic ME (AME) does not take into account the endogenous losses that do not come directly from the ingested diet but are composed of digestive secretions, intestinal desquamation, bacterial bodies, nitrogenous constituents originating from protein catabolism, etc. Therefore, AME underestimates the energy value of feeds when intake is low since, in these conditions, endogenous losses in excreta become proportionally more important compared to high feed intakes. In order to calculate ME values that are independent from the intake level, Guillaume and Summers (1970) proposed that endogenous losses should be subtracted from total losses in excreta.

True ME (TME) can be calculated from the equation:

where Ee is the excreted endogenous energy voided by the cockerel during a digestive balance experiment.

This concept was used by Sibbald (1976) to develop a rapid and miniaturised method to measure the “true” energy value of feeds in adult cockerels.

Due to production level - growth or egg production - the growing chicken or laying hen can therefore have ME values higher than those observed in the adult cockerel, which is on average at zero nitrogen balance. Therefore, the correction of ME for nitrogen retention in birds allows the comparison between animals and improves measurement precision since in a group of birds the nitrogen balance is variable.

This balance can be measured or estimated. The measurement consists in determining the nitrogen content of the diet and excreta. The nitrogen balance (ΔN) can be calculated by:

Q is the quantity and N is the concentration of nitrogen in the diet when ingested (i) and excreted (ex).

The nitrogen balance could be estimated by measuring the live weight gain (LWG) of birds during the balance experiment, assuming that the gain contains 20% protein i.e. 3.2% (20 / 6.25) nitrogen. The level of body protein, feathers included, varies according to the age of the bird. The nitrogen balance can then be calculated by:

In the same way, TMEn can be calculated after having estimated the non-nitrogen endogenous energy losses: Eenn = Ee – 0.0344 ΔN. These losses, which exclude nitrogen losses, only represent a few kJ per cockerel per day.

In conclusion, TMEn is the best estimation of the metabolisable energy of a diet because it is independent of the level of ingestion and does not into account the endogenous fraction that does not come directly from the diet. Theoretically, only TMEn values are additive. However, when ingestion levels are close to spontaneous ingestion levels in the birds, AMEn and TMEn are similar. 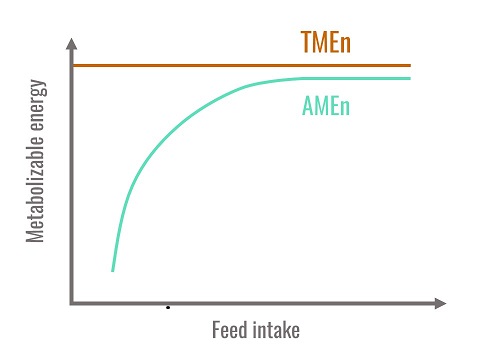 In practice, ad libitum feeding of birds is the most commonly used feeding method in Europe for all types of birds: growing chickens, turkeys or adult cockerels. A reference protocol was published at the beginning of the 1990s (Bourdillon et al. 1990) and each laboratory, including INRAE, has since simplified the method. The birds are accustomed to the experimental diet over a 3-day period. Then they are fasted for a period varying from one night for young chickens to 24 hours for cockerels. Once the excreta collection system is installed, the birds are fed for two days and then fasted again. The totality of the excreta is collected during the last three days of the balance period.

Figure 2. Protocol for the measurement of metabolisable energy used by INRAE

Under these conditions, the levels of ingestion are high when the diets are palatable and only the AMEn is determined. Unlike force-feeding methods, this protocol is not suitable when the feed material is fed alone and poorly or not consumed. Therefore, it is necessary to replace part of the reference diet by an equivalent amount of the feed material to be tested and its ME is calculated by difference, assuming that the values are additive. The levels of incorporation of the feed materials depend on their nature and on their practical conditions of use. For instance, maize can represent 96% of the diet while fats only represent a few %. For this latter type of ingredient, several levels of incorporation are generally used to assess whether there is a synergy between feed materials and to improve the precision, which is inversely proportional to the level of incorporation.

The two types of energy values presented in the tables are AMEn. One is for the adult cockerel, which serves as a reference in many laboratories, and the other is for a 3 week-old chicken. Chicken and cockerel differ as lower digestibilities of fats and starch are observed in the younger animal. In order to obtain AME values, it is necessary to know or calculate nitrogen retention, which can be as high as 40 %, and multiply it by the nitrogen concentration (g/kg) of the diet or feed material and then multiply it by 0.0344 MJ. The result obtained is added to the AMEn value.

The AMEn values published in these Tables are derived from measured values obtained in ad libitum feeding conditions by research organisations using a digestive balance technique very similar to the one described above. Theses values have been used to create equations taking into account the chemical composition of each feed material (Carré and Rozo, 1990; Fisher and McNab, 1987).

The nutritional value of a protein mainly depends on its amino acid composition, but knowing the amino acid profile is insufficient to judge the quality of a feed material: proteins can be associated with other components such as carbohydrates and they can also be altered by heat treatment, resulting in less efficient digestive enzymes. The digestibility and the metabolic utilisation of dietary proteins vary greatly according to the feed materials and their technological treatments. A global estimate of protein digestibility can be obtained by using the method published by Terpstra and de Hart (1974), which consists in chemically separating urinary nitrogen from undigested protein nitrogen, both of which are eliminated at the cloaca. Uric acid is solubilised and then undigested proteins are precipitated using lead acetate. The protein content is measured by the Kjeldhal method. A correction factor (total N = 1.18 x precipitated N) is applied to take into account the fact that not all faecal nitrogen is precipitated and that some urinary nitrogen is precipitated. The estimation of the quantity of undigested dietary protein enables the calculation of protein digestibility. This rough estimate of protein value has now been replaced by measurements of availability and digestibility of individual amino acids.

Amino acid availability is defined as the proportion of an amino acid that is truly usable by the animal. It is only used for limiting amino acids and estimated using chemical and biological methods. Only the latter methods have a large range of applications and are able to generate data for all sources of proteins and their constituent amino acids. Growth tests measure the ability of a protein to replace an essential amino acid, particularly lysine, in the diet of a growing chicken. A regression equation between growth rate and the quantity of lysine ingested is established, using lysine-deficient experimental diets supplemented with increasing proportions of synthetic HCl-lysine (supposed to be 100% available). At the same time, other groups of chickens receive diets formulated with increasing quantities of the tested feed material, which should be the only source of lysine. The growth rates of these animals are then compared to those of animals receiving the synthetic lysine. This method allows the measurement of the availability of a single amino acid at once and was principally developed for lysine. It does not take into consideration the possible interactions with the other constituents of the feedstuff being tested, particularly anti-nutritional factors.

In vivo digestibility methods that enable the characterisation of all the dietary amino acids are now the most common methods for estimating the protein value of feed materials for poultry. They consist in the determination of the proportion of each amino acid that is not eliminated in the excreta. These methods correspond to a digestive balance test where the quantities of each amino acid ingested and excreted are measured, either at faecal or ileal level. As microbial activity is concentrated in the hindgut and as the main sites of absorption of amino acids are the jejunum and ileum, the analysis of ileal contents rather than excreta might be a reliable method for assessing protein and amino acid digestibility (Bryden et al., 2009). In the 1990s, INRA performed measurements of true amino acid digestibility using intact adult cockerels (Zuprizal et al. 1990). As the birds were force-fed with the amount of diet required to cover protein requirements, the proportion of endogenous losses in the excreta was very low. The endogenous losses were estimated using fasted animals. The previous version of these tables (Sauvant et al., 2002) presented these values as well as those obtained using the same system and similar methods.

Since the 2000s, it has been acknowledged that digestibility determined at the terminal ileum is a better measure of amino acid absorption by the poultry (Ravindran et al., 2017). There are two main methods, using typically 21-day old chicks at the beginning of the assay:

In both cases, the digesta from the ileum is collected after killing the birds. The collection of ileal digesta using an ileal cannula, like in pigs, is theoretically more accurate, but it is more difficult to perform. Also, it must be done with adult birds and thus may not reflect digestibility in rapidly growing broilers. Protocols for measurements of apparent and standardised ileal digestibility have been developed and are now common. The concepts of apparent and standardised digestiblity are identical to those used for pigs. They are described in detail for this species.

The availability of plant phosphorus was long considered to be 30%, but numerous studies have shown this parameter to be highly variable, as it depends on endogenous phytase activity, on the proportion of phytate phosphorus in the feed materials and on the technological processes undergone by the feeds. The availability corresponds to the percentage of phosphorus utilised by the animal in comparison to a source of available phosphorus, usually monocalcium phosphate. One of the biological criteria used to estimate availability is bone mineralization, since practically all the phosphorus contained in the body is found in the skeleton. Young birds are fed with semi-synthetic diets, either deficient in phosphorus or supplemented with increasing levels of mineral phosphorus (monocalcium phosphate), which is thought to be 100% available. A dose-response curve is obtained by plotting the quantity of phosphorus ingested versus an indicator of mineralization such as tibia ash content. At the same time, different groups of animals are fed with experimental diets where the tested feed material is the only source of phosphorus, and a dose-response curve is calculated between ingested phosphorus and bone mineralization. In order to obtain linear relationships, all the diets are formulated to maintain the birds in a state of phosphorus sub-deficiency. The availability of phosphorus for the tested feed material is equal to the ratio of the two regression slopes thus calculated (fig. 3). This is the most commonly used method. 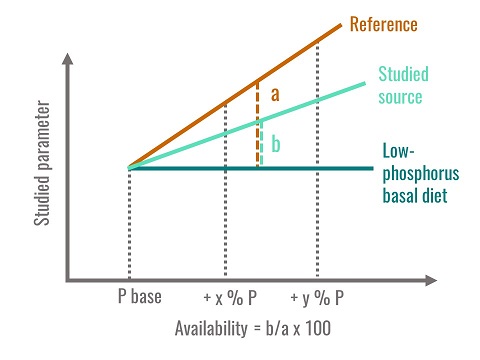