The environmental data for feeds included in these tables have been produced through ECO-ALIM, a French project led by IFIP and funded by ADEME and the French Ministry of agriculture. IFIP, Arvalis, Terres Inovia and INRA collaborated with the feed industry (SNIA, Coop de France Animal nutrition, AFCA-CIAL and feed manufacturers) to produce environmental data suitable for inclusion in least-cost feed formulation with a goal to reduce the environmental impact of livestock feeds and of the resulting animal products (meat, milk, eggs).

The environmental impact values of feeds were assessed by Life Cycle Analysis (LCA) and are expressed per kilogram of feed. 6 parameters are included:

The characterization method CML-IA (Guinée et al. 2002) was chosen for the calculation of eutrophication and land use and ILCD method for Climate Change (CC), acidification (AC) and cumulative energy demand (CED).

Different LCA perimeters were used (Figure 1), depending both on the needs of the user and the transformation steps of ingredients. 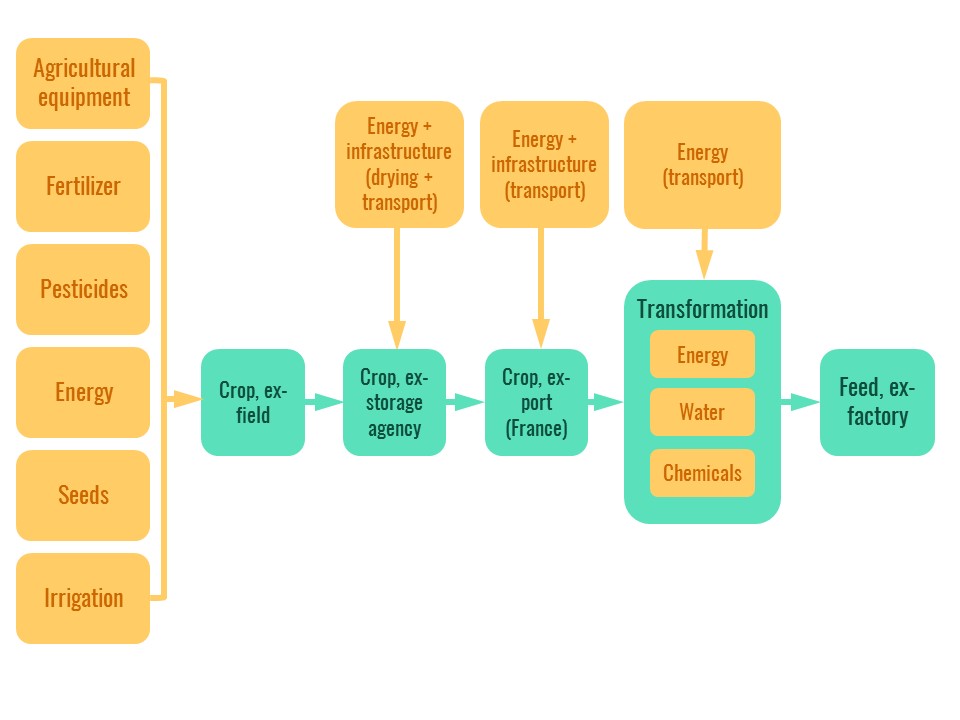 The different values available for the main French crops correspond to different agricultural practices: average means, intercropping, organic fertilizers or with introduction of legumes in the rotation.

Crop LCAs were based on emission models recommended by Koch and Salou (2013), updated and adapted to the French context. Data were collected over the period 2008-2012. Economic impact allocation between co-products was applied. The background data (electricity, transport) came from the Ecoinvent V3.1 database. All produced data were checked and validated by an LCA expert committee.

ECOALIM produced a dataset of 160 data for approximatively 50 different feeds. Variations result from the different perimeters for one ingredient but also from the different practices involved. These resulted in 26 data for cereals, 11 for cereal co-products, 27 for legume and oil seeds, 32 for oil meal, 28 for fats, 6 for fodder, and 9 for minerals and additives.

These environmental data are useful to: